Which News Updates appear on the front page?

I'll list out how Drupal chooses which two news updates appear. There is three pieces of relevant information. I'm going to list them in order of importance: 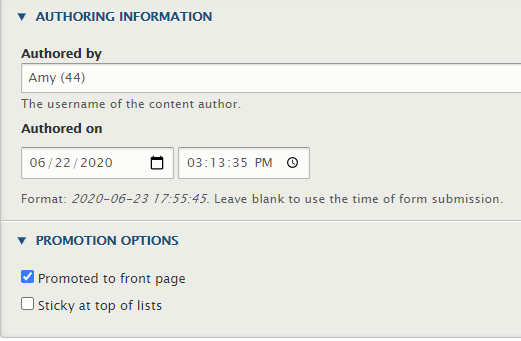 You may run into the issue where the promoted to front page checkbox is checked but your post still doesn't appear on the front page. The reason for this is likely that there are already two posts that are "stickied at the top of lists". You need to unsticky those posts by unchecking that promotion option. Alternatively you could just sticky the post you are trying to get on the front page. That way the two most recent stickied posts will appear.

In rare situations you may need to actually change the "Authored On" date. Ignoring the promotion checkboxes, the more recent posts are show first.